I am regularly presented with paintings that require research and writing up for auctioneers catalogue 'notes'. Here is an example of a note I wrote about an Irish genre painting. I identified and compared it and placed in its proper context. It was published by the Gorry Gallery, Dublin.

Only a few of Margaret Allen’s paintings have yet come to light.  She exhibited 53 titles, including many portraits, some of children, at Dublin’s Royal Hibernian Academy between 1853 and 1894. She lived in Dublin initially, then also showed her work regularly from addresses in Manchester, in the 1880’s and ‘90’s.
This insightful and accomplished portrait is one of at least two, unmistakably of the same carpenter, identically dressed in his characteristic working clothes. The other, slightly larger, closer portrait, has him looking directly at the viewer, smoking the same pipe (with its distinctive colours and facetted metal cover), which can be seen here tucked into his hatband. The other, also signed, which is dated 1863, is apparently ‘St Patrick’s Day in the Morning’ as lent to the Dublin Exhibition of Arts, Industries and Manufactures in 1872 (No. 280) and featuring in an exhibition in these rooms, in October 1991. 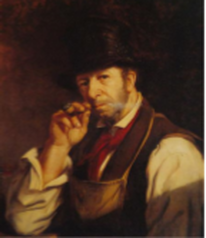 Portraits of specific people, such as this study, are quite unusual, within Irish genre painting at this time. In terms of composition, this painting shares common characteristics with another of Allen’s more complex, later narrative works. ‘Bad News in Troubled Times “An important arrest has been made – that of a young man named-“’ (exhibited R.H.A. 1886, and Irish Exhibition in London, 1888), was also exhibited here (March, 2008), and is symbolically and patriotically narrative. Both full length portraits centre on a man reading a newspaper. Each is seated at the same angle, facing towards a suggested hearth, which is out of sight to the right. Each includes arrangements of objects in the upper right hand corner, which combine narrative with deliberate suggestions about the man’s range of possessions and diet. A pair of leather clad bellows, carefully painted to show the swirling grain of the wood, hang alongside the lathe-turned wooden beetle; useful for many tasks, including mashing potatoes. There is also a wrought iron ‘flesh fork’, that enabled people to take choice pieces of food, safely, from the ubiquitous boiling pot. In the same corner can be glimpsed the edge of what is likely to be a Bow or Frame saw, telling us that he is woodworker, whose work includes cutting curves. The latter explains his unbleached linen apron, protecting his waistcoat, and worn over a full-sleeved shirt, with the cuffs turned back. His hobnailed working boots are polished to a shine. Such neat clean clothing in good condition, at a time when the working population were frequently observed to be ragged or poorly dressed, suggests that he is a carpenter, furniture maker or cabinetmaker (whose status and income was usually higher). A small table suggests his own handiwork, with cleated ends and ‘honest’ or revealed construction. Also built to last, is his carpenter’s side chair, with nicely turned front legs, imitating more fashionable examples, but with stretchers linking the legs. His newspaper tells of his literacy. Perhaps it’s the end of the day, as he relaxes with his glass of porter, poured from an elaborate pink jug that traditionally was filled and carried home from the public house. Beneath the table an earthenware jug is a type then imported on a large scale through Dublin from Buckley, with its distinctive gleaming black glaze. The artist shows us that he combines his trade with growing his own potatoes, which can be seen in abundance tumbling from a potato harvesting basket, beside his spade. The entire room, with its floorboards, speaks of comparative comfort, when the homes of many working Irish people had earthen floors and they ate their potatoes directly from a basket, rather than from a table.
Dr Claudia Kinmonth MA(RCA) MRIA
References.
Joe Hogan, Basketmaking in Ireland (Wordwell, 2001), 74-77.
C. Kinmonth, Irish Country Furniture 1700-1950 (Yale University Press, 1993), 45-50, fig. 48.
Ann. M. Stewart, Irish Art Loan Exhibitions 1765-1927 Index of Artists vol.1 A-L (Manton, 1990), 6.
Ann M. Stewart, Royal Hibernian Academy of Arts Index of Exhibitors 1826-1979, vol. 1 A-G (Manton, 1985), 10-11. ​
Tweets by ClaudiaKinmont1